Child Custody Tips for After a West Virginia Divorce

Co-parenting in West Virginia can be a challenge for any parent, but it is especially challenging for divorced parents due to scheduling conflicts with an ex-spouse or partner. The warmer months involve weeks of trying to entertain the kids and arrange childcare while you work, all while trying to coordinate with an ex-spouse’s schedule.

If you aren’t careful, co-parenting can be exhausting, but co-parenting, especially while the kids are out of school, can become a competition on who the children see more. Given that you’ve probably already been through the family court1 during your divorce, you’ll want to do what you can to work through this season.

Though you most likely already have your co-parenting schedule that was set by the court, it is a good reminder to talk it over with your ex-spouse to ensure that it will be followed correctly. If you are in the process of getting a divorce, be sure to talk with your child custody lawyer about your wishes not only for the warmer months but for the rest of the year so it can be settled while in court.

Planning ahead should be your number one priority when it comes to co-parenting throughout the warmer months, like summer, or while your kids are out of school. During that planning stage, talk about simple issues, like days out and who will pay for them, as well as broader issues like possible vacations. That way, each parent knows exactly what’s going to happen and when and offers assurance that there won’t be any surprise trips away from home or sudden expenses that one party will have to cover. This is the kind of thing that a child custody attorney could talk you through and help you settle in court during your divorce hearing.

Obviously, there are going to be times when you need to arrange childcare. Arguments will arise if you do not abide by the arrangments that were set during your divorce hearing. This helps to prevent the issue of one parent feeling put out if they find that the other parent has been using childcare services that were not agreed upon. To avoid this, plan childcare options together, especially if this was your court agreement, such as a particular baby sitter, or family member.

Though you may not be married anymore, your ex-spouse will be in your life if he/she is the other parent to your children. That’s why it is necessary to agree on the rules and show a united front when it comes to parenting your children. Make sure you both know what bedtime schedules look like, if your kids are allowed to be out alone, or if you have a child who is grounded at one house, to be grounded at the other to show unity.

While warmer months like summer are more relaxed than term time, arguments are inevitable if one parent lets the kids get away with more than the other parent allows. Even worse, this can cause your children to play you off against one another. That’s a spiral no co-parent wants to deal with.

Sometimes, you can put the above pointers into place and still stumble into trouble. In that instance, contacting a West Virginia family law attorney is often the best way forward. With a child custody attorney behind you, you can develop plans without having to talk with your ex-partner at all, if need be, or lay the legal groundwork to ensure you both stick to the plan in place. If you’re in the process of getting a divorce, or if you are having child custody issues, don’t hesitate to contact Bradford Law Offices, PLLC for all your child custody and family law needs. 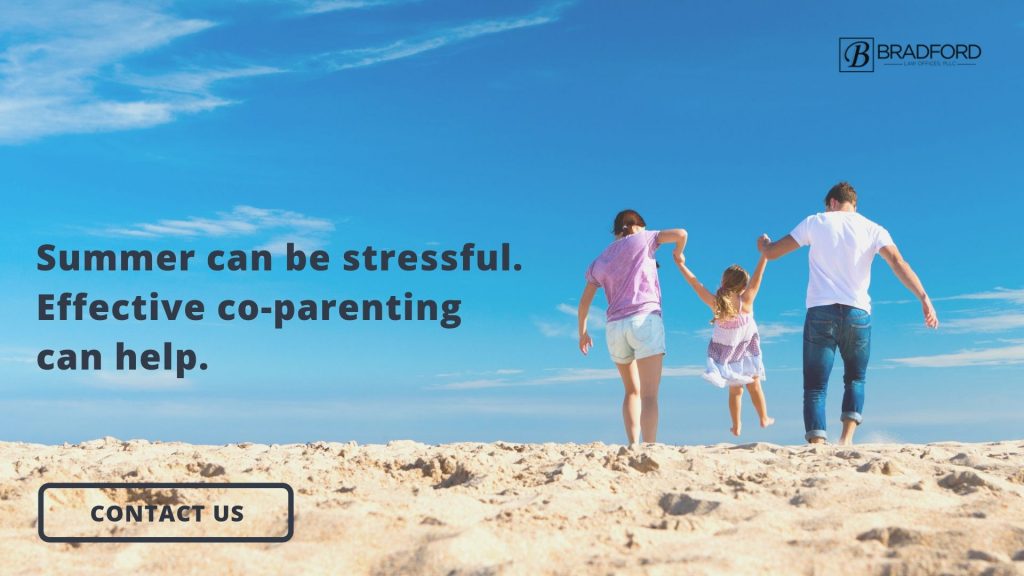 Tim Bradford Attorney at Law. Call Us Now (304) 501-5820 | 231 Capitol Street Ste 300, Charleston, WV 25301 | Privacy | Disclaimer
This Website is for informational purposes only and is not intended to create an attorney client relationship. You should consult an attorney for any legal advice.

Please consult an attorney for advice about your individual situation. This site and its information is not legal advice, nor is it intended to be. Feel free to get in touch by electronic mail, letters or phone calls. Contacting us does not create an attorney-client relationship. Until an attorney-client relationship is established, please withhold from sending any confidential information to us.